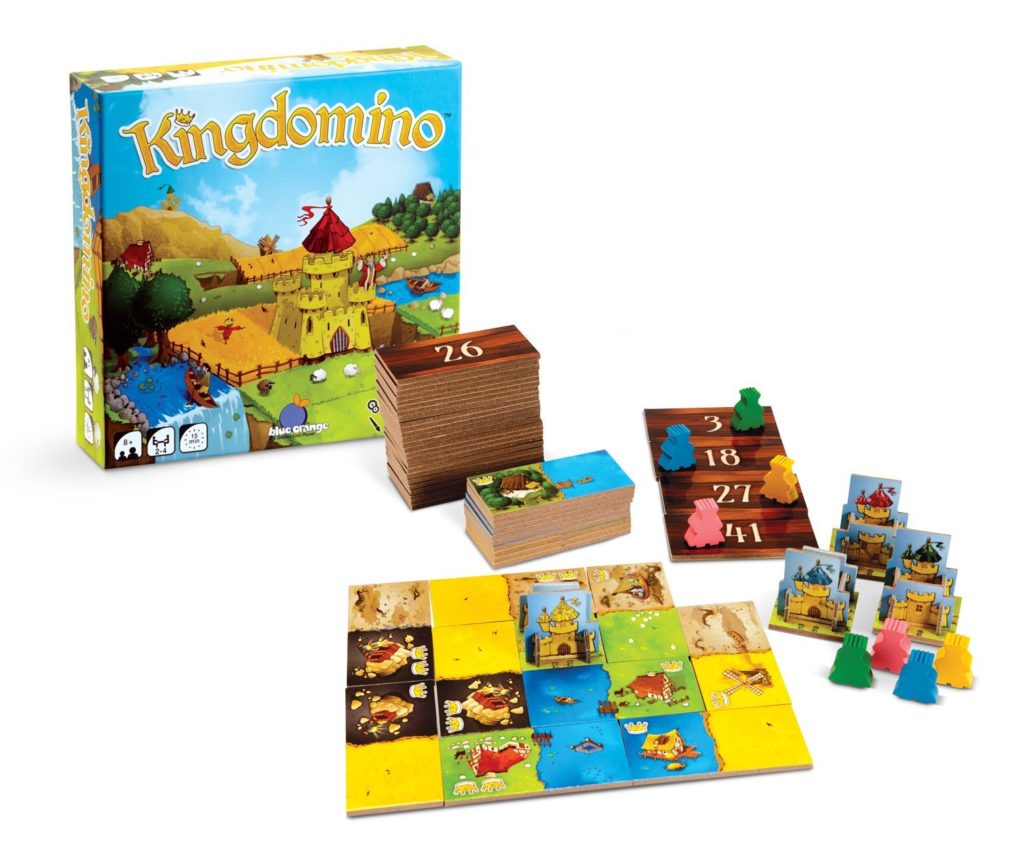 Many boardgamers might agree that Carcassonne is the game that has made tile laying games very popular. It was published in 2000 and has a ton of expansions.  For some reason, I have never been a fan of it so my first reaction to Kingdomino was pretty much “it is just another Carcassonne clone”. Then one of my favorite board game reviewers, Zee Garcia said this is one of the best games of 2016. That made me watch a gameplay and right after I was done watching the video, I immediately ordered it online.

Kingdomino is a very fast playing tile laying game that uses the same simple rule from dominos. (Hence the name:)). It is designed by Bruno Cathala and Cyril Bouquet and published by Blue Orange Games. It is for 2 to 4 players and for ages 8 and up. Plays in about 15-20 minutes. I should warn you though, most likely you will want to play again and again especially if you lose. You can’t let someone else build the best kingdom, no way!

Each player is Lord seeking new ways to expand his kingdom. You must compete with other Lords to explore the best plots, mountains, lakes, wheat fields. The player that builds the kingdom with the most valuable landscapes will be the winner. 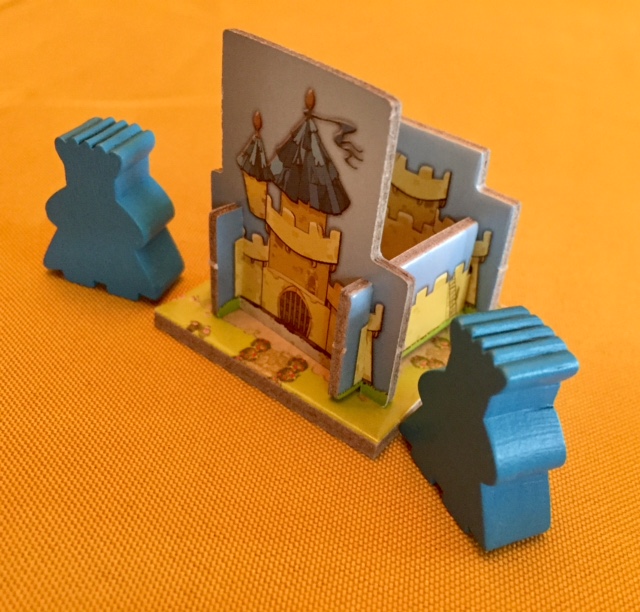 The game comes with 48 numbered landscape tiles, game pawns in four different colors and 4 castles. Each player gets a castle and the pawns of a certain color (2 pawns each if playing a 2 player game). Next, shuffle the landscape tiles and place them in the box numbered side facing the players. If you are playing a player game you use all the tiles. For a 2 or 3 player game, a set number of tiles is removed randomly from the game during setup.

Draw the first 4 tiles numbered side facing you and place them on the table in ascending order. For example, if you draw the tile numbered 12, 25, 3, 45, you must put 3 on top then 12 then 25 and then 45 at the bottom. Then turn the tiles over to the landscape side. One player takes all the player pawns in his hands, shakes them and randomly without looking at them drops one pawn on the table. The owner of that pawn now decides which one of the 4 tiles he wants to take by placing his pawn on that tile. 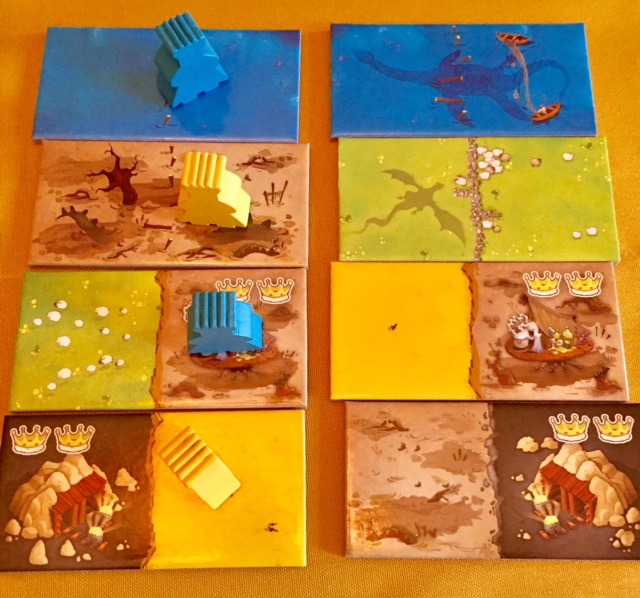 Repeat this process until all pawns are placed on each tile. Only one pawn can be placed on one tile.

The last step of the setup is to draw the next 4 tiles from the draw pile, numbered side up and place them in ascending order next to the initial 4 tiles. Then flip these tiles as well. These tiles will be the ones the players will choose from in the next round.

You are ready to go. 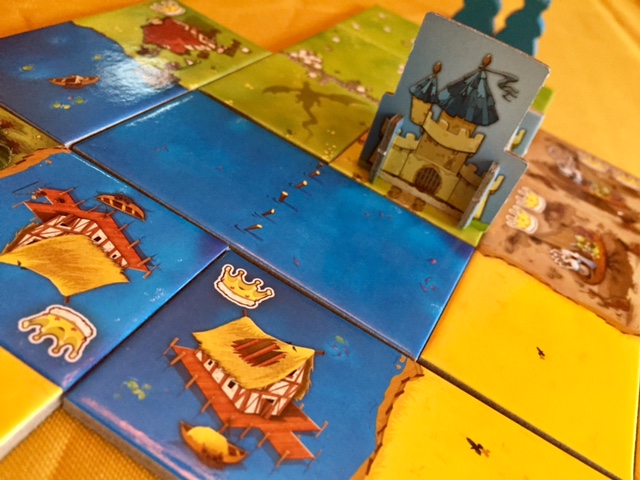 The players take turns taking the tiles they have placed their pawn on one of the available tiles for that round. The player with the pawn on the first tile (the tile on the top) gets to go first. He first takes his pawn and the tile and then he has two decisions to make. Where to place the tile in his kingdom and which tile to place his pawn for the next round.

One minor wrinkle, your kingdom cannot be bigger than a 5×5 grid. You can go up to a 7×7 grid if you are playing a 2 player game. This limitation adds a very interesting challenge to this game. You keep playing until you run out of tiles and then everybody checks their kingdom and adds up their points. 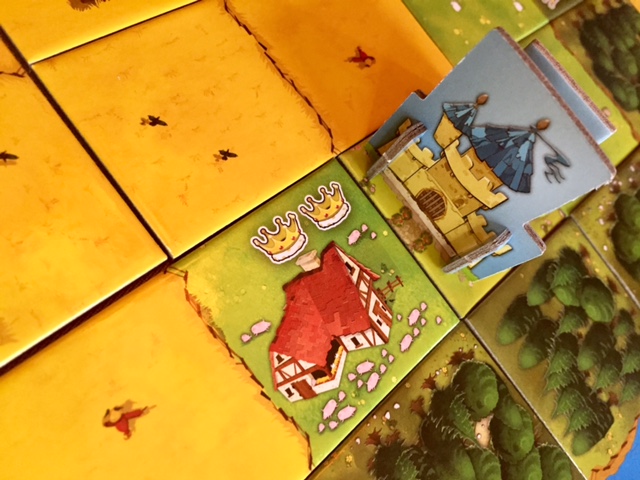 How you score the game

Your castle does not have to be in the middle of your kingdom by the way, and you can have empty spaces in your kingdom because of the way you placed your tiles. If you choose, you can play with a variant that lets you earn extra 10 points if you can make a perfect 5×5 grid at the end of the game. 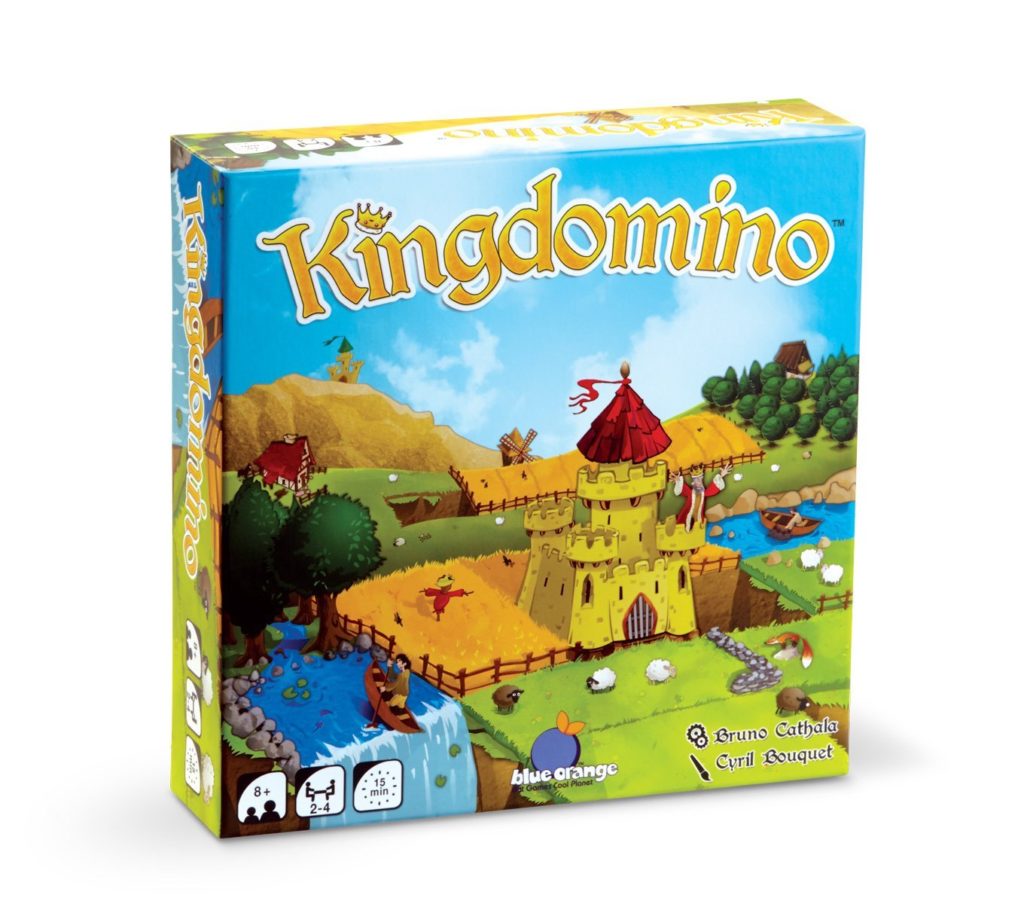 Kingdomino is a simple game and that’s where its elegance is. It is not easy but not too complex, a great gateway game to introduce designer board games to new people and a great family game. It also is a very good solitaire game in my opinion. Because it only takes about 15 minutes to play, you can easily set it up as a two player game and play by yourself. Big thumbs up from me, great game in a small box.

If you need more gaming ideas for your next family gathering, check out top 21 board games for families and 15 party games.