One of my favorite genres in board gaming is cooperative games. Not only it is incredibly satisfying and fun to try to beat a game together as a team, it is one of the easiest ways to get into modern board games.  Because you are on the same team, the tension of missing a rule or making a mistake that results in you losing a game to someone is eliminated right from the start.

If you have one player in the group that is familiar with the rules, it makes it very easy to explain the game and start playing right away. Even if the new players don’t remember the rules, that one player is always there to help remind everyone else what their options are.

Usually, cooperative games don’t require the players to hide any information from each other, everything is out in the open for everyone to discuss and come up with a strategy. This provides, for example, a game that adults can play with kids and help them play the game without risking the kids to miss a rule or two and feel bad about it. 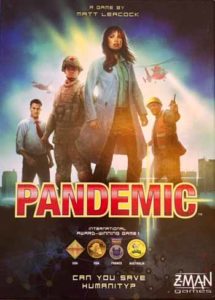 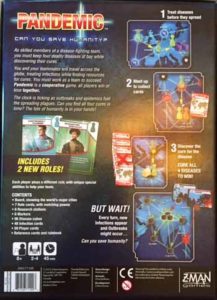 In this article, I wanted to talk about THE game that introduced me to this genre, Pandemic.

Pandemic is a game designed by Matt Leacock and published by Z-Man games in 2007. It is one of the most popular games not only in the genre of cooperative games but in modern board games overall. It has multiple expansions, versions with different themes.  There are pandemic tournaments around the world, last year Time magazine did an interview with Matt Leacock the designer.

It plays 2 to 4 players, although like most other cooperative game, you can play this game solo if you want.  The age requirement is 8 years and older.

In Pandemic, the players are part of an elite team that works for Center for Disease Control based in Atlanta. There are four deadly viruses spreading around the world, and your job is to stop these viruses and find a cure for each one of them before time runs out!

If you don’t like the virus theme, you can easily pretend that the cubes that represent the viruses are zombies. I know there is a ton of Walking Dead fans out there. You can pretend you are saving the world from them instead of viruses.

The viruses are represented by four different colored cubes (red, yellow, black and blue) which are limited in quantity. These cubes a seeded on the board by drawing a certain number of city cards from an infection deck. Because this deck is shuffled every time you start a new game, every game you get a random set up. At the beginning of one game Europe might be in trouble, and the next game, South America needs your immediate attention, or it might be Asia, you never know. 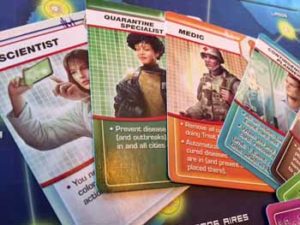 Each player picks a character from a group of available characters, and each character has a special ability. One character, for example, is the Medic, that lets you treat any one of the diseases faster than any other player. Or you can be the Scientist, she can find a cure for any of the viruses faster than others.

The players receive a number of cards from the player deck based on the number of players in the game and place their pawns on Atlanta on the board.

I will give you an overview of how the game plays, I am not going to explain all the rules in detail in this article. However, I will add a link at the bottom of this article to an actual gameplay video of Pandemic. That video will give you a better idea about the rules.

The game is played on a board that has a map of the world with multiple cities on each continent. Every city is connected to at least two or more other cities on the map. Game play is very simple, turns are usually very quick. Once you play a turn or two, everybody pretty much gets how the game plays very quickly. The game also provides quick reference cards for each player. 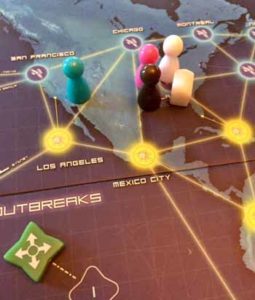 On your turn, each player can carry out up to four actions. There are multiple options for each action. You can move from one city to another, treat a disease, cure a disease completely, build a research center or share cards with another player. All these actions are voluntary, the current player does not have to take any actions at all.

The best part of it is, before taking any actions, you are free to consult your teammates on any one of these actions.  This will allow you to think couple moves ahead, plan for a future outbreak or any other surprises the game may throw at you, and yes, there will be surprises:)

After you are done with your actions, you draw two cards from the player’s deck and add them to your hand. Here is where the game can throw you a big curve ball. If one of the cards you draw is an EPIDEMIC card, one of the viruses starts spreading faster than the others and now you have a problem, because it may cause an outbreak or a chain of outbreaks. 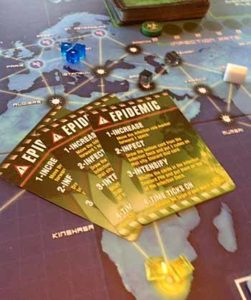 And like that wasn’t enough, the cities that you thought were under control or you did not think can get any more viruses are shuffled back into the infection deck.

After drawing two cards from the player’s deck, the last thing happens at the end of every player’s turn is, the active player draws cards from the infection deck. These cards have the color and the name of every city on the map, and you place one virus cube from the supply of cubes on that city on the map based on the name and color of the card you draw. This simulates the viruses spreading all over the world.

You thought Tokyo was safe because it only had a couple of red cubes on it, well after drawing cards from the infection deck now Tokyo is up to three cubes, one more cube will cause an outbreak. Tokyo has just become a priority!!

The game radically changes when you start drawing cards from the infection deck but once the epidemic cards start to show up now you are really in trouble. Initially, it seems like you are in control, treating diseases, moving all over the world, you have got this, and then, there are problem areas all over the world.

How the game ends

The game ends when one of four possible things happens.

As I mentioned before, the cubes that represent the viruses are limited in supply. If any point during the game, you need to put a cube on the board and you don’t have that cube in the supply, you are out of luck, that disease has spread all over the world and you just lost the game!

At the end of every player’s turn, the active player draws two cards from the player’s deck, and if that deck runs out before all the diseases are cured, yes you guessed it, you lose the game 🙂

Well, how do you win this game then? Well, you win by only finding a cure for all four viruses. That is the only way to beat Pandemic! (The link for the game play video explains how you find cures) 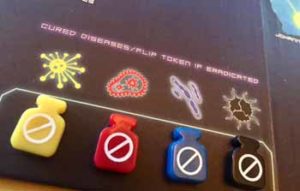 Pandemic is the first modern board game I bought. Before I bought it, I watched the same video that is at the end of this article. His enthusiasm and the game play itself made me want to buy this game right away.  This game takes you on a roller coaster ride, one minute everything is under control and then the game starts to fight back and you find yourself staring at the board with your teammates, laughing, and saying “what just happened, we were doing so well a second ago!”.

At first, it seems like it may take a long time to play a complete game of Pandemic, however that is not the case. Most of the time you are done in about an hour maybe even 45 minutes, and yes, it is not an easy game to beat, but that is one of the things what makes this game great. I don’t like to lose, but I have so much fun losing a game of Pandemic, I want to play it again right away. When you win, man that is a great feeling, especially you know you did it with the help of your teammates.

That’s what makes Pandemic one of my absolutely favorite family board games of all time.

Please feel free to send any comments and or questions.

Here is a short gameplay of Pandemic with Rahdo.