Cards games are probably the first games we learned how to play when we were little, usually because they are quick to learn and quick to play. A couple of weeks ago, a 5-year-old taught me how to play Go Fish, and she did an amazing job explaining the rules. Then, me and her brother, who is 4, had a great time, it took us 30 minutes max. to play a whole game. 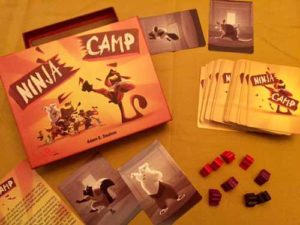 Ninja camp has both those things going for it, in addition to a bunch of other great qualities. It is very easy to learn, takes about 10 minutes to learn the rules. At first, it seems like it may take a bit longer to play a complete game, however, you quickly realize that the “board” is shrinking and disappearing in front of your eyes, next thing you know, the game is over in about 25 -30 minutes :).

The game is designed by Adam E. Daulton, who is a Human Resources Specialist by day, published by ActionPhase games. It plays 2 to 4 players and the game box says it is for 14 years and older. However, in my opinion, you can easily teach this game to a 10-year-old.

The whole game consists of 16 wooden ninja meeples, 85 cards, and the rules. It comes in a 7×5 box, which makes it a very portable game that you can take anywhere with you. 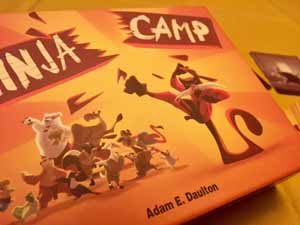 In this game, each player controls three aspiring ninjas, attending a ninja summer camp to learn new cool moves to impress Sensei Saru. The ninjas you control are all some kind of cute animal, the artwork in this game is awesome, sort of like kung-fu panda style. Additionally, every player belongs to a specific ninja clan, which gives a player a unique ability that can be used once during the game. And yes, that ninja clan is also a type of animal as well.

Ninja camp is a competitive game. Every player starts the game with two starter cards, one evade card and one sprint card. Then each player randomly picks a ninja clan card and takes three ninja meeples of the same color of their choice. Next, you remove all the access starter and clan cards from the deck. Finally, you shuffle the rest of the ninja cards, depending on the player count, you place them face up on the table in a grid. For example, in a three player game, you place the cards face up on the table in an 8×7 grid.

The player to have most recently visited a summer camp is the starting player. Beginning with the first player in a counter-clockwise fashion, each player takes a turn placing one of his or her ninja meeples on one of the face-up ninja cards on the table. Once all the players place all their ninjas, the game is ready to begin. 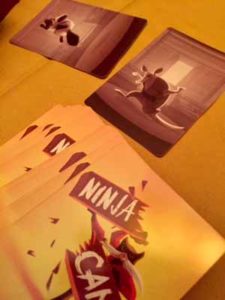 How do you collect cards you ask? Simple, by playing one card from your hand or activating your ninja clan card.

On your turn, you can only do one action. And that action can be ONE of the three options below. 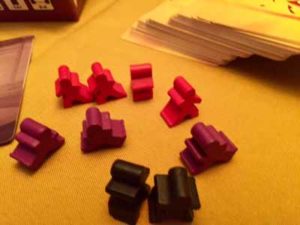 1) Play a card from your hand and do exactly what that card says. At the beginning of the game, for example, each player has the same two starter cards. Evade and sprint.  On your turn, you can choose to play one of these cards. If you choose the evade card, you have to pick one of your ninjas that are on one of the cards and move that ninja exactly three spaces. Then you pick up the card that your ninja started on and add it to your hand. You will get the points on the card you have just picked up at the end of the game,

This is the core mechanism of the game. When a player takes a card from the “board” (or the grid) in this manner, that card is not replaced with a new card. The grid starts to shrink and disappear, there will be gaps between cards that are left on the table.

Your options will be fewer each turn and eventually, you will not have any legal actions that you can take with the cards you have in your hand.

3) You can pass. If you pass, you are out of the game. Then you have to wait for every other player to pass. Once everybody passes the game ends and everybody adds up their points.

Passing action is usually happens when you do not have any “legal” moves left, meaning, you cannot do any of the actions that are on any of the cards that are in your hand. 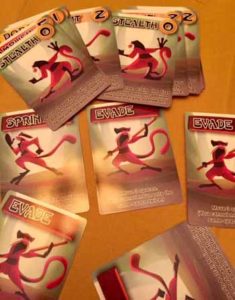 I am going to explain some of the cards that are in the game. That should give you a decent idea what kind of options these cards give you when you have them in your hand and choose to play one.

Dodge: Lets you move 1 or 2 spaces, including diagonally. Normally, you are not allowed to move diagonally when using any other card.

Leap: Lets you jump over a gap in a straight line between the card your ninja is on and the first card after the gap. The size of the gap does not matter. 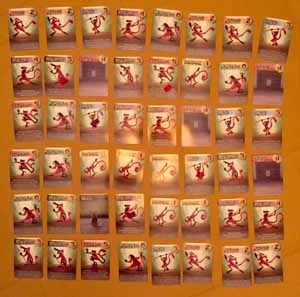 Ambush: Lets you move one of your ninjas in a straight line into a card with another player’s ninja. That player’s ninja gets bumped into the next card. Normally you are not allowed to move into a space that has another ninja meeple on it, including yours.

Wall: A wall card does exactly what it implies. It blocks a player from moving through or into the wall card.

Trap: A trap card is just a regular card with -1 points. It has no special power. If you start your movement on a trap card, you take it and add it to your discard pile and at the end of the game, it is negative 1 points.

There are a few other cards that I haven’t explained, you can find out about them when you play the game, they are not complicated to understand.

There are 13 different ninja clan cards. Each player chooses one randomly at the beginning of the game and can use that card’s special power only once during the game. The trick is to know when to play that card. Most of the special powers are a better version of the normal ninja cards but some clan cards have a really unique ability.

You may end up being a part of the skunk clan, may be the penguin, or the polar bear clan. Each clan card is an animal with a really cool, cute art on it. 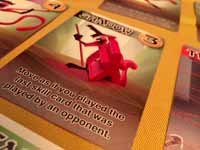 The rules and the game play for this game are super simple. However, don’t let that fool you. You have to pay attention to what you are doing from the set up if you want to win this game.

The first game I played, I did not pay any attention where I was placing my ninjas at the setup phase of the game, my opponents did, and that ended up being the difference.

The cards are really easy to understand. The decision of which ninja to move where and when is the challenge. If you are not paying attention, one of your ninjas might be stuck on a card in one of the corners and you are out of options for that ninja!.

The game starts out slow because there are a lot of cards that you can move your ninjas into at the beginning of the game. Once the cards start to disappear, the game speeds up as you have fewer movement options for your ninjas.

Ninja camp is a great filler card game that will challenge you. Most likely you will want to play it right away after you finish your first game. I know I did :).

If you would like to watch a full gameplay that includes a full description of the rules, click here.