I have never been into puzzles. There are too many pieces to organize and it takes too long to complete one. After becoming a board game geek, I discovered that I like the idea of a game that creates the illusion of solving a puzzle. For example, you can argue that Pandemic is kind of a big puzzle, that is constantly changing and you are trying to figure out how to solve it.

When I heard about games like Carcassonne or in this case, Karuba, a tile laying game, at first I wasn’t that interested. They sounded too much like straight up puzzle building. I haven’t played Carcassonne yet, but I was definitely wrong about Karuba. It is much more than just putting puzzle pieces together. 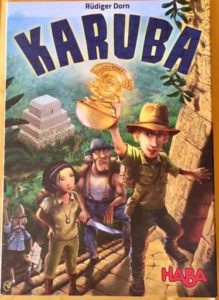 Karuba is an addictive tile laying and kind of a racing game that plays 2-4 players. It is designed by Rudiger Dorn and published by Haba, a great company that is normally known for games aimed at young children. Karuba however, is a family weight game. The minimum required age is 8, but don’t let that fool you, it will challenge you in a fun way, not because it is complicated but because of the way it plays.

One more thing I want to mention before I go on, if you have multiple copies of this game, for example, let’s say 3 copies, you can play 12 players at the same time. It is almost like bingo in that sense. It will make more sense once I explain how the game plays, so let me do that now.

You are a group of adventurers.  You have just arrived at the island of Karuba to hunt for treasures and most importantly find a path through the jungle and get to those temples you have heard so much about. You start at the beach, and you have a pretty good idea where the temples are, but there is one problem, you don’t have a map of the jungle, so you are going have to do some exploring yourself to get to them.

Each player gets a set of jungle tiles, 4 different colored adventurers, 4 different colored temples, and a game board. Every player has the same jungle tiles. One player shuffles his tiles and places them next to his board face down, in a single pile or if it makes it easier, multiple piles. The important thing is, these tiles need to be shuffled and placed face down. 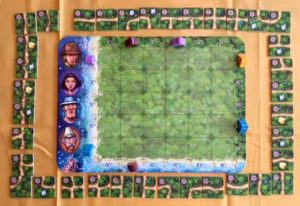 All other players turn their jungle tiles face up and place them around their board in order, starting with the tile that has the number 1 on it. Each player gets 36 tiles. So when they are placing the tiles around their boards, they place the tiles numbered 1 through 9 on the top of their board, then 10 through 19 on the right side of the board and so on. The important thing to remember is that all these tiles are placed face up.

Then, randomly, one player decides where to place one of his adventurers on one of the beach locations on his board.  The beach locations are on the left side each board as well as the bottom of each board. In addition to that, he also decides where to place the MATCHING temple on one of the forest spots that are on the top of the board as well as on the right side of the board. 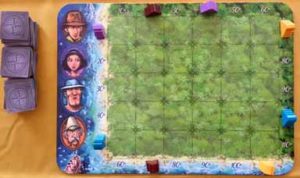 All the other players place the same colored adventurer and the temple exactly on the same spots on their board. Then the next player clockwise decides where to place one of the remaining three adventurers and the matching temple on his board in the same manner.

The players take turns placing all the adventurers and the matching temples one by one until all of them are placed on every player’s board in the exact same spots. 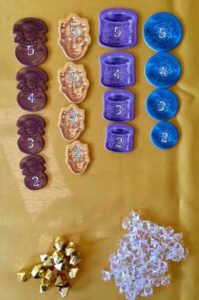 The last thing for setup is to place the point tokens the gold nuggets and the jewels next to the play area. There are a group of victory point tokens for each temple, and they are valued 2 through 5. You stack these tokens in order with the highest value on top (5 point token on top). You will end up with 4 different stacks of tokens this way. Finally, separate the gold nuggets and the white jewels in two different piles and you are ready to begin.

The purpose of this game is to get the most points at the end of the game. The game can end in two different ways. If any one player can get all four of his adventurers to the matching temples, the game ends immediately and the players add up the gems and/or the victory points they have collected.

Additionally, if the players run out of tiles before any one player can get all four adventurers to the matching temples, then the game ends immediately as well, and you add up your points, gems again to see who had the most points.

The way Karuba plays is very simple. The player that has all his tiles stacked face down in front of him draws the top tile from the stack, flips it over and tells everybody the number that is on the top left corner of that tile. All the other players take that same tile from their face up tiles they placed around their board. 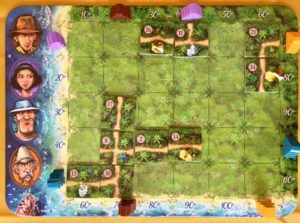 Now, every player has to play that tile. There are two things you can do with that tile. You can either place it anywhere on your board that is not occupied by a tile already, or you can discard that tile to move one of your adventurers. Every tile has a path on it. When you discard a tile, you may move one of your adventurers as many steps, in any direction, as there are paths leading to the edge of the discarded tile. You can move an adventurer only along a path that is on your board. If you have no tiles on the board, you cannot move.  If the paths on your board lead to a dead end, well you are at a dead end!

If you draw a tile with a gold nugget or a white jewel on it and choose to place that tile on your board, you pick up the gold or jewel from the supply and place it on that tile. If one of your adventurers ends its movement on one of these tiles, you can pick that jewel or gold up. They are victory points at the end of the game. 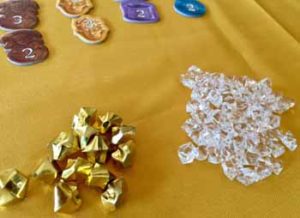 That is it, that’s how the game plays. Each turn, the player with the face down tiles draws a tile and everybody either places that tile or discards it to move on their own boards. You keep playing until one of the game end conditions is met.

There are some other details about movement restrictions, tile laying but you can learn about them from the rule book easily. You can also watch a full rules explanation and gameplay here.

Every year the game of the year award is given to a game in 3 different categories in Germany, also known as Spiel Des Jahres. Think of it as the Oscars of the board gaming world. In 2016, Karuba was one of the nominees in the family board game category. It did not win, but considering there were over 600 games that came out in 2016, to be nominated in itself is amazing.

I personally fell in love with this game as soon as I watched the gameplay video I mentioned above. It plays very smoothly, it is surprisingly challenging, especially because of the no rotating rule. When you are placing the tile on your board, you cannot change the orientation of the tile. The number on the tile has to be on the top left corner of that tile when you place it on your board, you cannot rotate it. That is the orientation, and that simple rule forces you to make some interesting decisions. 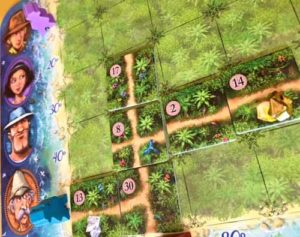 Additionally, as I mentioned before, you can play this game with a large group of people if you have enough copies. The gameplay does not change at all, you can have a room full of people playing it like bingo, one person calling out the tile he or she picked from the face down pile and everybody else playing that same tile. I don’t know any other game that can do that, yet 🙂

It plays fast, and usually right after you finish your first game, you are going to want to play again. It is funny, at first because everybody can see each other’s boards, you think at least one player might start copying another player’s moves. That is not the case at all, everybody plays it radically differently.

You can even play this game solo if you want. Just throw the tiles in a bag and start drawing randomly one at a time and see how many of your adventurers get to the temples before you run out of tiles.

As you can tell, I really like this game, highly recommend it.