When you initially discover the world of designer board games, you quickly realize it can be quite overwhelming to decide what game to buy, or even play to see if you like it. The number of games that are available out there is enormous not to mention the hundreds of new games that are published every year.  Even a game like Pandemic, which plays very smoothly, can be a bit intimidating for someone that has never played a modern designer game before.

My solution to this problem was to find a game that had game mechanisms I was already familiar with. For me, that was a dice rolling game. From Monopoly to Sorry, from Yahtzee to Risk, pretty much every mass market game you can find at a big box store has some kind of dice rolling in it.

Las Vegas is that game. It is the perfect gateway game for a rookie gamer that is looking for a simple gameplay, luck of die rolling with some quick interesting decisions. And most importantly, of course, a whole a lot of fun.

Las Vegas is designed by Rudiger Dorn, the designer of Karuba, and published by Ravensburger. It plays 2 to 5 players in about 30 minutes. It involves a lot of dice chucking. The game also comes with a variant if you decide to play with less than 5 players, which I will explain later in this article. The minimum age for this game is 8. 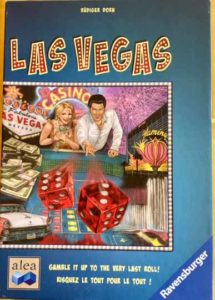 In this game, you are visiting six different casinos, represented by six different tiles with very familiar artworks on them, also known as famous Las Vegas casinos. Your goal is to make the most money, and you try you achieve that through area control, don’t worry I will explain what that is down below. You play 4 rounds, and at the end of 4 rounds whoever has the most money wins the game.

You place the six casino tile in the middle of the table. Each casino tile has a die value on it, so if you wish you can place the tiles in order based on the values on them.  Then you shuffle the deck of banknotes and start dealing out banknotes, face up, next to each casino. You deal out a banknote next to a casino until the total value of the banknotes for that casino is at least $50,000. This means some casinos may have more than one banknote next to them. 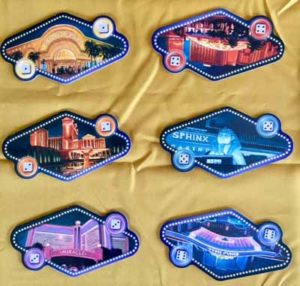 If the first banknote you flip from the deck happens to be a $50,000 note, that is the only banknote that casino gets and you move on to the next casino.

Next, each player gets 8 dice in the color of his choice. The rule book says the oldest player is the start player but you can choose randomly if you would like.

That is it, you are ready to roll. 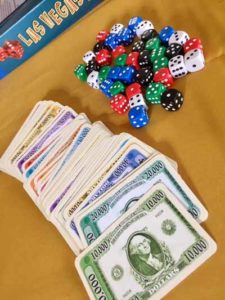 Turns are extremely simple. On your turn, you roll all of you dice and decide which casino you want to allocate your dice on that turn. The rule to allocating dice to a casino is; you have to place all your dice that has the same value as the die value on the casino tile you choose to play.

The second rule is, if you rolled a bunch of twos and you choose to place them on the two casino tile, you have to place all the twos you have rolled. You cannot place a couple twos and decide to keep one for your next turn. You can also place only one die of any value you have rolled if that happens to be the only die with that value. 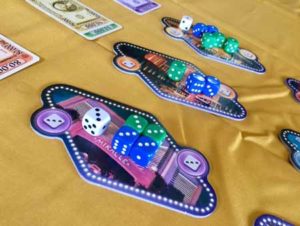 Once you have played one group of dice you have rolled this way, your turn is over. Those dice stay on the casino tile, your next turn you will have less dice to roll.

All players take turn placing their dice on a casino tile of their choosing until everybody plays all their dice.

Once everybody’s dice is placed, that round is over and you check to see who has the majority on each of the casino tiles. For each casino, the player with the most dice of his color wins that casino and takes the highest value banknote. This is called area control and is used in a lot of games, Risk being a good example. If there are more than one banknote next to a casino tile, the player with the second most dice of his color gets the second highest value banknote and so on. 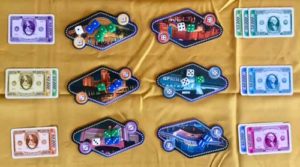 It is possible to have an equal number of dice for multiple players on a single casino tile. If that happens, those dice cancel each other out and nobody wins that tile. The banknotes for that casino are discarded from the game.

If there are two players tied, let’s say with each player having two of their dice on a casino tile, and there is a third player that has one die on that same casino tile, the tied players cancel each other out and the third player with one die wins that casino. This simple wrinkle makes your choices very interesting, especially towards the end of a round when you have only a few dice left. You can decide to go for a casino with only one die that you think may “fall on your lap” if one of the other players roll a number that may cause him to tie another player on that same tile.

You keep the banknotes you earn at the end of each round, then take back all your dice, draw new banknotes for each casino and play the next round. At the end of the fourth round, the player with the most money wins the game.

Variant for less than 5 players

If you have less than five players, there is a really cool variant suggested in the rulebook. Let’s say you are playing a two-player game, and one player is green and the other player is blue. Each player takes the 8 dice of his corresponding color and takes 4 white dice each.

The white dice are “dummy” player dice, you roll them on your turn with all of your dice. And you also place them on a casino tile following the normal rules. So, if you are the green player for example, and you roll 2 green ones and 2 white ones, you still have to place all four of them, including the two white dice, on the value one casino if you choose to play that casino. 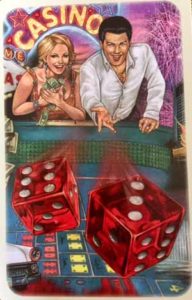 Las Vegas is a very easy to learn game that plays really quickly. It is a great way to get into designer board games. It is also a great gateway game to introduce your friends, family to this great hobby. Who doesn’t like to chuck a bunch of dice?

It doesn’t take a lot of table space, light, easy to carry with you if you want to bring to a family gathering. I bet most of the time after you are done playing you will want to play again right away.

If you would like to watch a 25-30 minute full gameplay video, you can find it here.