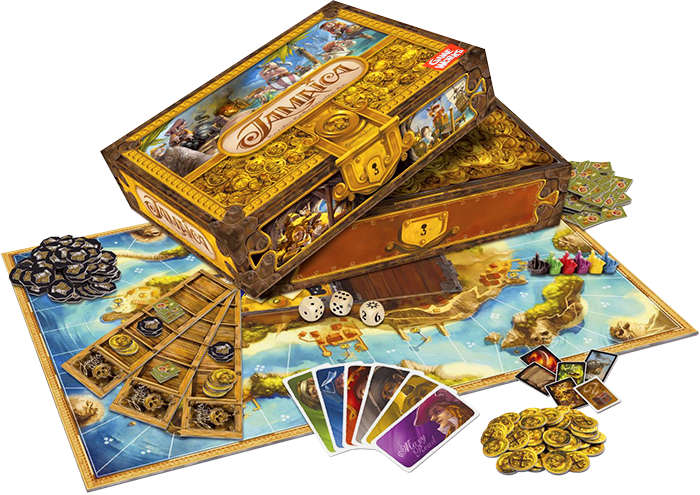 Some games are so beautiful, they get your attention right away. Quality component, vibrant colors, attractive board. It all comes together so well you can’t help but want to know more about it. Yes I know that sounds shallow and no I don’t ever buy a game just because of how pretty it looks but if a game is already well designed and fun and it also looks gorgeous, that definitely makes a game move up on my must buy list.

Jamaica is one of those game. The first time I heard about this game was on the Dice Tower network, it was one of their top ten lists and Zee Garcia could not stop talking about how gorgeous this game is. He also put this game on his top 10 games of all-time list, those two factors made me want to watch a gameplay video of Jamaica and I was sold.

Jamaica is a racing game, designed by Malcolm Braff, Bruno Cathala, and Sebastien Pauchon. I have the version that is published by Gameworks but currently, this game is published by Asmodee, one of the largest board game publishing companies in the world. It plays 2 to 6 players, and minimum age is 8 years old. It usually takes about an hour the play and it plays well with all player counts. 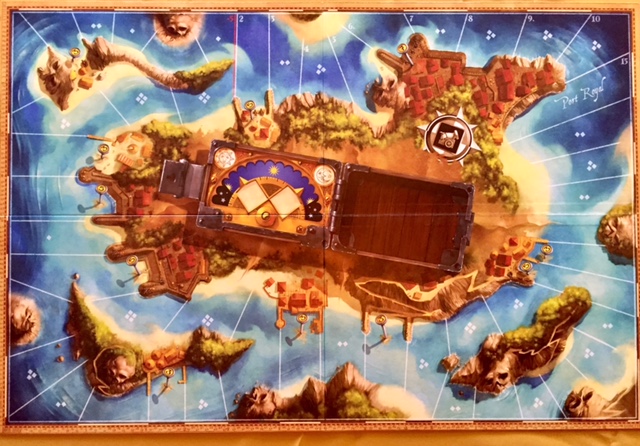 In 1678, after a long career of piracy, Henry Morgan somehow manages to become the Governor of Jamaica. 30 years later, he decides to celebrate his anniversary by calling up some old pirate friends and organizing a race around the island of Jamaica. There can be only one winner, the pirate that has the most gold in his ship’s holds at the end of the race. You will have to feed your crew, find treasure, fight off other pirates and occasionally may have to plunder your way to victory. Good luck!

Place the game board in the middle of the table. Every player gets a deck of pirate cards, the matching color ship and a cargo hold for the ship. Additionally, every player gets 3 food tokens and 3 doubloons, also known as gold, and places them in two of his ship’s holds.

Shuffle the 12 treasure and power cards and randomly take 9 of them and place them face down in the allocated space on the board. Return the other 3 cards to the game box without looking at them.  Next, place one treasure token on the board on each of the spots with skulls on them. These spots are pirate liars.

The player’s ships are placed on the Port Royal space of the board. One player is selected the first player randomly and given the compass. You are ready to sail.

In Jamaica, your goal is to be the first pirate to sail around the island of Jamaica with the most gold in your ship’s hold. The ships move around the board in clockwise fashion based on the actions the players decide to take. 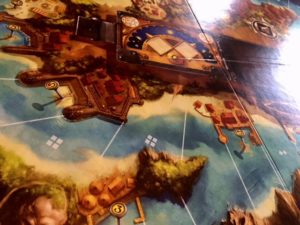 The turns are super simple. First, all the players take the top three cards from their pirate deck and look at them without showing them to the other players. Then, the player who has the compass that round rolls the two action dice. Now he has to allocate one of the two dice to the day action and the other one to the night action spot on the board. He looks at the three cards he has drawn. Each card has two symbols on them, one on the top left corner, one on the top right corner of each card. These symbols can be food, movement (green arrow for forward, red arrow for backward), gold and gunpowder. The one on the top left is for day action and the one on the top right is for night action.

Let me explain with an example. You are the first player and you rolled 4 and a 6. You look at three cards you have in your hand. One has a green arrow on the top left corner and a gold on the top right. The other card has a gunpowder symbol on the top left corner and a red arrow on the top right. And the last card has food and gold on each of the top corners. You decide to go with food and gold and also decide to use 4 for food and 6 for gold. You take the two dice you have rolled and place the 4 die in the first slot (day action) and the 6 die on the second slot (night action) of the navigation space on the board.

Now all the other players must choose one card from the three cards they have drawn this turn based on the values of the dice you have placed on the board. 4 for a day action and 5 for a night action. 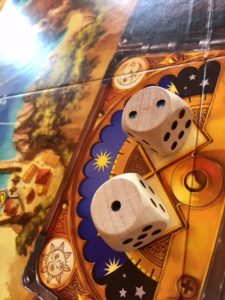 Once everybody has decided what card to play, each player reveals the card he has picked and in clockwise order, starting with the first player, in this example you, players resolve the actions on the cards they have picked.

All the other players resolve their cards in the same fashion. They might up moving forward 4 spaces and taking 6 gunpowder or taking 4 gold and moving backward 6 spaces. It all depends on the card they have chosen to play that turn based on the dice the first player rolled and placed in the navigation box.

That’s it. After every player is done, the first player marker moves to the next player on the left, the cards that were played that turn are discarded. Then every player takes one more card from their deck into their hand so they have three cards to choose again and you play the next round. 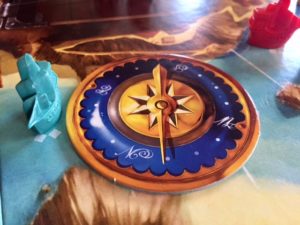 You keep playing until one player sails around the island and gets back to Port Royal. As soon as that happens, everybody counts the gold they have in their holds and whoever has the most gold wins the game.

Let’s say you played a card that has a green arrow as the day action. The die roll for the day action was 4 so on your turn you move 4 spaces, clockwise, on your turn and end up in a space that has 3 white squares on it. The squares represent the food you must have in your ship to be able to feed your crew. If you have three food tokens total in your holds, you simply return them to the box and you successfully feed your crew. However, if you have less than three food tokens, then you must discard as much as you have and move back to the first spot on the board that you are able to pay the full cost. If you go back one space and that space has 2 white squares on it and now because you have no food tokens, you must move back one more space. 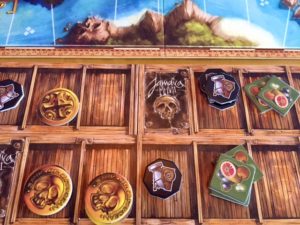 The Same principle applies to a spot with gold on it. The “harbor” spaces have a gold symbol with a number on it. You have to pay that gold. If you don’t have enough gold pay as much as you can and move backward.

You may end up moving backward this way until you reach a space that has no cost or a treasure token.

Also, if you end your movement on a space with another player’s ship, a sea battle occurs and you and that player have to resolve the battle before you pay any costs associated with that space. You may end up losing the battle which may end up costing you gold and then you realize you don’t have enough food to pay your crew and now you also must move backward until you find a spot you can afford.

I am not going to explain the details of the battle in this article you can learn that from the rules or watching a gameplay, they are really simple, however, I wanted to mention what happens at the end of a battle. 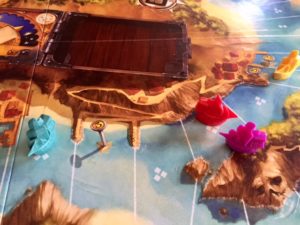 If you end your movement on any of the spots where there is a treasure chest token, you can take it, return it to the box and draw the top treasure card from the deck that is on the board. These cards may give you more gold, cursed treasures or some special powers that might help you in combat, movement etc.

The treasure cards you have that has gold or cursed treasures on them are kept secret from other players. The cards that have powers are placed face up next to your cargo hold board.

If you look at the board, you will see a red line with the number -5 next to it. As I mentioned before, the game ends as soon as one player gets back to Port Royal. At that point, the players that are still behind this red line will lose 5 points. There are also positive points to be gained if you finish the game beyond that red line. Each spot beyond the red line has a point value on the board. Port Royal has 15 points for example. These are extra points you will gain in addition to the gold you have at the end of the game.

Jamaica is a fun, light-hearted gateway game with beautiful artwork. It has a lot of player interaction, you are engaged even when it is not your turn because you want to see where your opponents may end up. Or they may end up exactly where you are and now you may have to fight them off. Normally I do not enjoy games with combat in them. However, the combat in this game is really so light and fun that it doesn’t bother me. 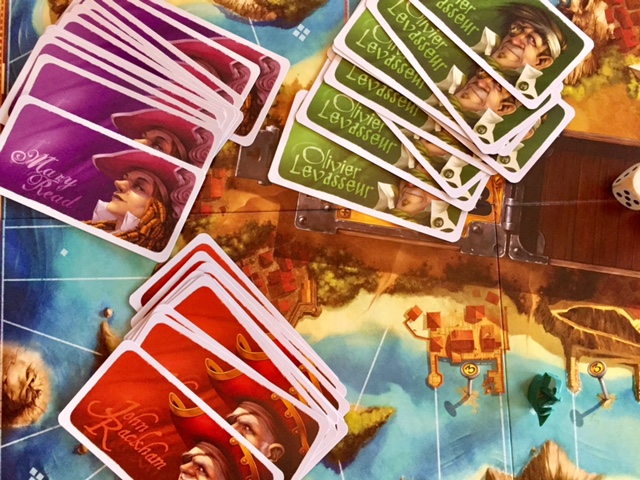 In my review for Karuba, I said that game feels like a racing game. Well, Jamaica is a racing game without a doubt, so if you are looking for one, I highly recommended. Good luck buccaneer!

“Ahoy! Please be pardoning our barnacles during your voyage. Navigate above and search to the right. Your feedback is much appreciated as we swab the deck o’ the new site!”